The 5 best teammates Faker’s ever played with 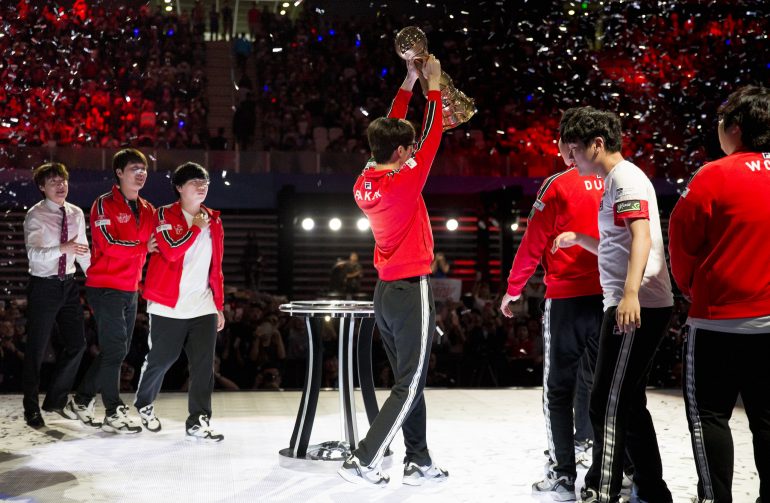 Over the last six years, SK Telecom T1 has fielded some of the most star-studded rosters in League history. Built around star mid laner Lee “Faker” Sang-hyeok, the team has won international tournaments all over the world. Next year should be no different: the team signed a bevy of talented players to surround Faker with, and in the new roster’s first showing, it looked pretty good.

While we salivate over how good the new-look SKT could be, with we thought it would be cool to look back at the best players Faker has teamed up with on SKT over the last six years. Sure, 2018 was a disappointing season, but that shouldn’t detract from the team’s unprecedented run at the top of the game.

So here are the five best players Faker’s ever played with, ranked.

We start the list with someone who’s been with Faker for a long time and helped him win numerous championships. Support Lee “Wolf” Jae-wan has often clinched big games for SKT through his ability to initiate for the team in the late game. Wolf’s play has never been that mechanically intensive and the duo lane with him has always lacked early pressure. But when SKT won back-to-back titles in 2016-2017, Wolf was a key component in helping the team figure out how to play.

But as the game shifted to a more aggressive style in 2018, Wolf’s game fell off and the team started to look for a replacement. For now, he’s moved to Turkey to play for SuperMassive eSports. But SKT fans will always remember him for keeping the team’s atmosphere light during the championship seasons.

Lots of players have left SKT over the years for bigger paychecks and more exposure elsewhere. But not many have found success doing so. It seems like sharing the stage with Faker has made some players look better than they really are.

One of the biggest outliers from that pattern is top laner Jeong “Impact” Eon-yeong. Impact moved to North America following SKT’s first Worlds victory in 2013, and has established himself as a star. Even today, he seems like he’d be a great fit next to Faker: A top laner who knows how to absorb pressure and also deal with aggressively-minded opponents. Since Impact left, SKT’s top lane has been a virtual revolving door. One of the biggest “What Ifs?” of Faker’s career is what could have been if Impact never left.

One of the top laners that came after Impact that worked out the best was 2015 Worlds final MVP Jang “MaRin” Gyeong-hwan. Impact was a fearsome split pusher, but MaRin took things to another level by becoming the team’s primary shot caller.

On the surface, it looked like MaRin just called for the jungler to gank his lane all the time. But that belies his deeper understanding of where the team had to pressure in the lane phase. And it doesn’t touch on how fearsome MaRin’s teleport flanks and teamfights were.

At the end of the day, SKT almost went undefeated in Worlds 2015 with MaRin helming the attack. Surely the team will be hoping for more of the same from new top laner Kim “Khan” Dong-ha.

SKT’s inability to settle on a top laner over the last few years has put a lot of pressure on Faker and the team’s bot lane to play consistently. And for years, Bae “Bang” Jun-sik was an absolute rock in the bot lane.

Bang’s lane has never been flashy. He grinds out CS leads one creep wave at a time. Sometimes he’s susceptible to more aggressive opponents and junglers that camp his lane. But when SKT are able to keep him clean, he usually scales into a teamfighting monster.

There’s a reason why SKT’s style slowly transitioned into one focused on late-game teamfights. That’s because Bang’s positioning is phenomenal. He has a great feel for how to get the most damage out of a fight and take smart chances that lesser marksman don’t see. You don’t get to 1,000 kills in the LCK by playing meekly. Bang always loved to carry, and usually, he did.

There’s only one player who can compete for first place on this list. And that would have to be the player that has won just as many World Championships as Faker: jungler Bae “Bengi” Seong-Woong. That’s why, when Bengi retired a couple years ago, we wrote a tribute to Bengi and called him the “Right Hand of God.”

If you want to know why Bengi is first, read that article. Think of all the times he’s saved the team in their most crucial moments on the biggest stage. Remember his effervescent smile, self-deprecating manner, and the “sleeping Bengi” memes near the end of his career.

Bengi was never the flashiest player. His champion pool was questioned from the very beginning. And yet he managed to teach a generation of junglers how to influence the map without being the primary carry, how to ward and think about vision, and how to work with a once-in-a-lifetime mid laner like Faker.

Faker was at his best when Bengi was beside him. That’s why Bengi is first on this list. Hopefully we get to see that again with Kim “Clid” Tae-min and Kang “Haru Min-seung.